Holy moly, I have so much to share with you guys!

But first, let me first shout out to the awesome people I have met so far because of this blog- from Hannah the Bates rep, to Hillary and Emily! Hearing that my voice [any voice] is relevant is so uplifting and I love love love the experience of meeting people irl that I know from the inter webs.

Jack was a freaking STAR. With the exception of the night before dressage, in which he was a total idiot, planting his feet and snorting at the horse-eating-hoomans and flipping out about his tail (why is this a thing?), but since his brain was fully in its box when it mattered, I will forgive him these things.

Overall he was much more chill about the whole KY Horse Park atmosphere than I expected, though the hack out to the rings did get increasingly tense as the days passed. But in general, Jack really settled every time I put him to work, even if it was just a long and low walk to stretch his legs- if I asked something of him, his mind was so much more at ease.

So we arrived Monday evening, and by the time we has somewhat unpacked it was too late to do more than a cursory walk around the barns. Therefore Tuesday and Wednesday were our days for exploring, gaining confidence, and trying to navigate the huge horse park. This all well swimmingly until we got to our dressage warm up ring, which was not only somewhat remote and required crossing a very busy street (within the horse park, but still overrun with bikes, golf carts, and people in a hurry), but it was also adjacent to the Egyptian Arabian show that was going on. Jack would start to relax and then we would hear whooping and hollering from inside the indoor ring, or a hotter-than-hell Arab would pop out of the entrance with its tail flagged and screaming its tiny head off. This caused Jack to go into the afore mentioned melt down- not a great premonition for the actual test the next morning.

And yet somehow the eventing gods smiled down on us, and our start time of 9:24am was minutes before the Arabian show started (9:30) so we got to warm up in relative peace and quiet compared to the days before. The other ~4-5 riders in the warm up were polite and everyone was communicating well, basically a rare delight at any show, let alone a championship competition. I went through Jack’s warm up routine as planned- lots and lots of walk, asking him to go forward and back in that gait and adding in halts, then picking up to trot and a little canter before giving him another 5 min walk break. When we had about 5 minutes left, I picked him up and started asking for suppling and forward in the trot, and threw in a couple canter transitions to make sure they were crisp, and we headed up.

Immediately some of the tension returned when Jack saw the cameras, the volunteers, test runners, and what not that hadn’t been there the day before. So I gave him tons of pats and walked him over to the judge, said our hello’s, and got him cantering to loosen his back. Then away we went.

My first centerline isn’t captured in this video, but I did fill out the paperwork to get the official RNS copy. Overall I was trying to go for forward and relaxed, which I think we mostly achieved. Nerves got the better of me with some of our geometry, and then there’s the free walk. The simple truth is, Jack got behind my leg, and when I squeezed with both legs he took it as a cue to trot. Luckily he was obedient in coming back, which one judge gave us kudos for, but that particular part of the test may or may not haunt me from that day. 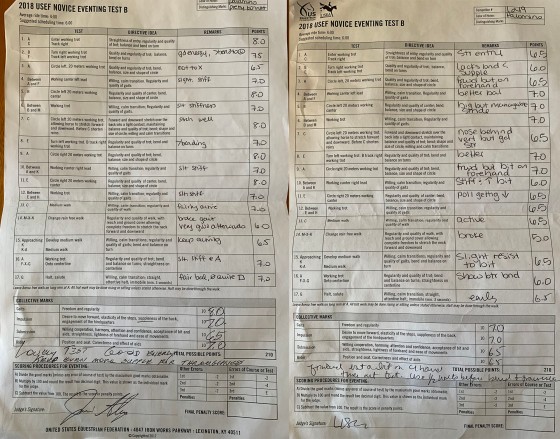 I think my scores from the 2 judges had the largest spread of the division- a 71.9 and a 65.2. The closest spread between scores was 4 points… so apparently the big yellow pony was somewhat controversial between the judges, and their vantage points.

Still, we were tied for 4th after dressage- but this was no dressage show!

No one I’d rather be quarantining with on our anniversary than @trgillis0324 ! Looking forward to folding laundry and Firebirds (takeout) later! Ow ow! 🔥🔥🔥
Grateful for a beautiful spring day with a breeze and lots of #socialdistancing!
Only took me 5.5 years, but finally got to explore the SAS campus trails with my 2 favorite guys! 🌿 Never knew some of these views even existed! Makes getting outside and #socialdistancing a dream! #alonetogether #getoutside #6ftapart
Happy birthday to these two gorgeous creatures that I get to call husband and mother (respectively)! I’m sorry it’s maybe not the day you imagined, but I hope it’s still a good one!