After dressage was settled, the nerves started sinking in. This is my first time doing anything more than maiden since…2015? In any case, I was lucky to have friends there to tell me to take deep breaths. Jack, meanwhile, had finally settled and was miffed that I woke him up from his nap to tack him up. He warmed up feeling like a calm hunter horse, which, though great for the relaxation, needed more push and packaging to get around the course we had ahead of us. We both were tired, and I had to verbally remind myself to dig deep and ride every fence.

Our round wasn’t maybe as smooth as it had been in the schooling the day before, but it was clear. Jack went from tired and strung out to feeling looky and up. The chips we got were a combination of not being quite balanced/forward enough and him being a little more backed off of the fences. There’s still so much to improve, but I was impressed that he stayed rideable and attentive as we navigated the course, even if we didn’t quite make all the turns that we had hoped to accomplish. The clear round moved us up into 1st out of 19 and then it was off to XC! But that’s a tale for tomorrow. 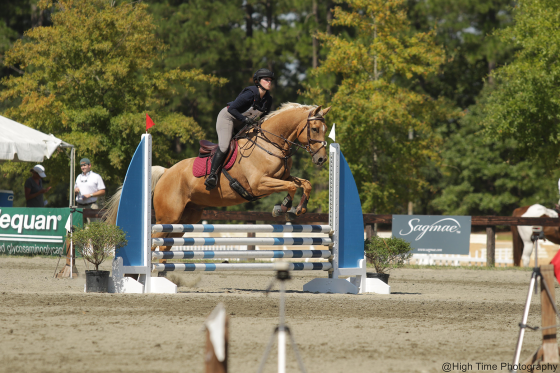 … what face am I making?
PC: High Time Photography

Riley’s warm up for jumping was again short and sweet. Basically W/T/C and do a cross rail a couple times. I had realized that morning that he has schooled stadium fences all of twice in the last 18 months, but figured that since it was small and he is basically a point-and-shoot ride that we’d be fine. And we were.

Given that his fitness is still a work in progress, I determined that I would simply feel it out in regards to cantering vs trotting the course. It’s therefore pretty unremarkable, but since we went around clear Riley earned a lovely blue ribbon and lots of pats for being the best boy ever.