Questions I ask myself this morning… Why do cats only barf on carpet instead of hardwoods? Why is the Dunkin Donuts closest to me 3 times slower than every other one? Why am I so sore?

Well, at least I can answer the last one. Riding 2 horses is hard work, y’all, but competing two horses is brutal. I now have so much more respect for Buck Davidson and his 10,384 string of horses that he competes. I took Jack (doing BN) and Riley (Green as Grass) to a schooling horse trial this weekend and my body is wrecked. But rather than whinge about my aches and pains, we’ll focus on dressage.

Jack did a cross country schooling the day before as well as a showjumping round, then proceeded to wear himself out by screaming and pacing his stall for an hour. So when he came out on Sunday for dressage, he was a very tired pony. I warmed him up away from the hustle and bustle of the warm up ring and tried to put some spring in his step, but overall he felt a little flat and not nearly as supple as I am used to.

This definitely translated into our test. While our upward canter transition is hollow at home as well (a training issue we are working through!), he’s not normally braced in the other changes between gaits. But in the test I was challenged to keep him soft through those movements. Jack earned an 8 on his free walk (awesome) and the judge nailed me for bracing my own legs into the downward transitions (a known issue for me, darn it). I walked out of the ring expecting to score a 34 or 35, and was pleasantly surprised to earn a 32, which shockingly put us in 2nd out of our division of 19 after dressage.

Riley handled the new atmosphere with his general aplomb, and spent Saturday toodling around at the walk checking out the sights. With energy conservation as the name of the game, he got a whopping 5 minute warm up before dressage. We practiced walk trot transitions and a few centerlines and headed over to the ring. My goal for the test was to ride with better geometry than the previous weekend, get straight centerlines and ride him more forward to my hand. Unfortunately my phone ran out of space just after the centerline, but I believe we accomplished all those goals.

Riley earned a 26 in dressage, a full 10 points ahead of the other (admittedly pint-sized, adorable) competitors in our GaG CT division. If you want to see a slightly less steady version of the test, you can watch this video from the previous weekend. Our free walk was hugely improved this time around, and Riley garnered sweet comments from the judge and even earned a 7.5 on gaits! 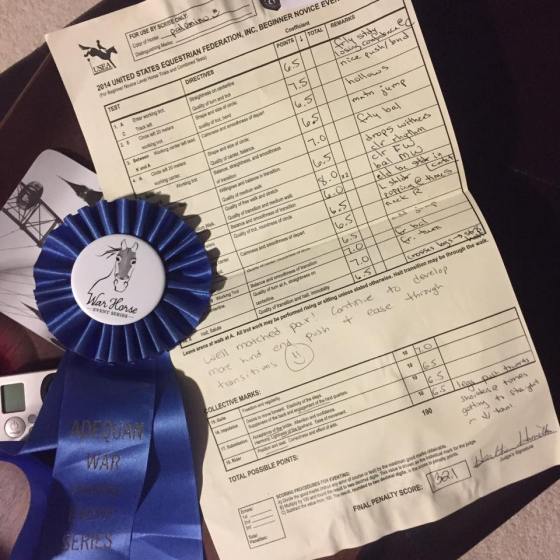 To say I’m proud of both boys is an understatement- they were phenomenal and given how green they are they handled everything amazingly well (bar Jack’s screaming). Tomorrow, jumping recaps!