Sorry for the unexpected radio silence last week. Any instagram stalking would reveal that I went on vacation, and a dead computer with its charger 4 hours away meant that blogging was impossible. Whoops.

Other than a half day spent with an old teammate (seriously, loving all the time recently with old dressage team pals!) spent tracking down and answering my questions about the local wild horses (details coming), it was a thoroughly non-horsey week.

After returning Thursday, I’ve been spending each day checking on Foster. He got his sutures removed on the 3rd, and unfortunately that appointment wasn’t without a bit of drama. While the sutures looked good, and taking them out was uneventful, getting his scheduled HA injection into the joint was a bit of a fiasco. 3 sticks with a needle and two doses of sedative later we had it done, but this then had to be followed by another week of bandaging nonsense.

With his revised post-HA-injection wrap

The other piece of news from that particular appointment came in the form of a schedule change to Foster’s recovery program. Whereas originally we were to start handwalking after the HA injection, now we have to wait an additional 2 weeks. Until then we are allowed to handgraze for 30-45 minutes (versus the original 15 minute limit), but no movement other than the gradual mozying from one patch of grass to another. 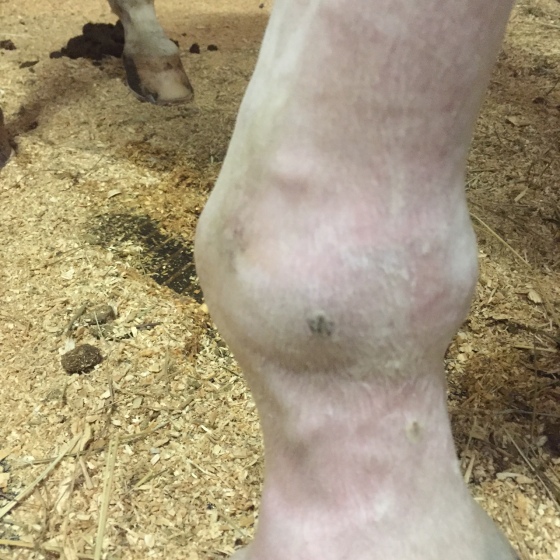 So on the 23rd of this month, we start walking for a whole 4 minutes, until a follow-up appointment for his first IRAP injection and fall shots. At that time we will re-evaluate and hopefully start adding time. I guess this makes sense in hindsight that we wouldn’t just start out at 15-20 minutes of walking, but I suppose my hopefulness to get back to work blinded me from the realities of recovery.

Wednesday we will be through our first month of stall rest, and already I am feeling antsy and ready to get back in the saddle. With the recovery process being slower than anticipated, it’s been a test of patience for myself and definitely for my somehow-still-behaving horse. But with luck, taking things slowly will mean a healthier, sounder horse with a bright future ahead of him. Here’s hoping!

11 thoughts on “The Recovery Plan Changes”