Right as we start to gain momentum, we have another setback. But that seems to be the way with horses, right? Two steps forward followed by one step back.

Ever since the amazing lessons in Southern Pines (here and here for the recaps), Foster has been Not Quite Right. The day after the lessons he was given off, then that Tuesday I hopped on to do some happy stretchy work. At the trot, something immediately felt funky. As I hemmed and hawed and asked the other rider in the arena what they were seeing, I felt him gradually get better, until neither of us could detect anything wrong.

Getting that stretch on the lunge line

The next day, and pretty much every day subsequent, I have thrown him on the lunge to see what’s going on, and every day has been approximately the same. As he first picks up the trot he is somewhere between slight-head-bobbing-lame and short-and-stiff on his left front, but as he continues going around it gets better and better. In less than 5 minutes he is moving quite freely and forward, and the only thing detectable is tension in his topline in the left canter.

And for stopping, we like to take conformation photos

I had hoped that it was shoe related, even though I wouldn’t expect a foot issue to get better with work, but after getting shod on Monday he is still no better. There is no heat or puffiness in his legs, no response to hoof-testers all around.

So I had a professional in equine massage/bodywork take a look at him, and when she saw him first go on the lunge she was amazed that he would work out of it, but as usual, he did. Her palpations did reveal a reaction in the top of his left shoulder and slightly in his right sacral area, which pretty much confirmed what I had been seeing. Everywhere else he actually is better than average, so the pain seems to be localized to those two places. I gave him a dose of Ulcergard and a gram of Bute and tossed him outside. 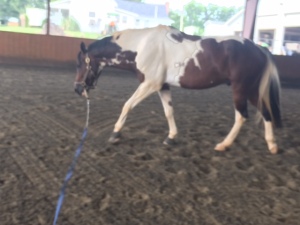 The vet will be coming out on Friday to assess the situation, which I believe is a “tweaked” shoulder for lack of a better word. Our pending BC lesson this weekend is cancelled, and I am hoping (likely in vain) that there is a quick fix that might salvage our planned lesson next weekend. And of course that clinic at the end of the month.

Keep your fingers crossed- there seems to be lots of bad lameness juju going around!

19 thoughts on “Foster and the NQRness”