Really this lesson ended up being more like a training ride/lesson hybrid, but it was worth it all the same. Eliza got there just as I finished warming up, and offered to hop on Foster briefly. I always think it’s great when she gets on him, because he seems like such a tricky horse to ride and for me to explain, that sometimes I don’t know how to translate what I’m feeling into the right questions.

Immediately, Eliza was surprised to feel how ‘stuck’ he is in his neck. I’ve been able to mask a lot of this tension with the way I ride him, but we really need to get to the meat of the issue before we can seriously consider collection and more advanced work, because the connection is not perfectly clear when he is bracing with the base of his neck.

Other remarks included how wiggly he is, and maintaining activity behind instead of letting him shuffle his hind legs like he’s wont to do. While Foster just tends to be a bit crooked, the crookedness is pretty specifically located in his hind end, and he likes to throw his haunches right instead of put weight on his left hock. And as far as the activity goes, she was much more adamant about reminding him to be active with subtle whip cues, and when he was really coming through behind, it was very noticeable! 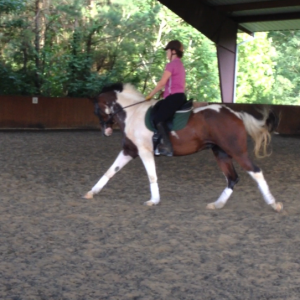 In the last 10 minutes, I hopped back on and tried to get a feel for what she was discussing. I definitely saw the difference in the canter, and we worked on the timing of my whip aid to keep the canter ‘jumping’.

So overall, an informative lesson slash training ride. Sometimes the perspective from the ground is just as valuable as being in the saddle! I’m probably going to ask Eliza to do a proper training ride on him sometime in the future. Do you do training rides? What do you like about them/maybe not like?

Lest we forget the OG... #fosterpants had an excellent day yesterday... starting with a bath which turned into a surprise trip to see his “other mom” (grass! Treat! Also not the weirdest thing he’s done) and culminating in a bridleless ride with yours truly. 🤗 Foster, you’ll forever be my ❤️ horse. Just the best!
He’s got the right idea.
If at first you don’t succeed... try trantering. 🤦🏼‍♀️ #jackvspoles #eventhorse #gentlemanjack
Finally going live with this project I was working on in my downtime! Head to @brittgillisdesign for more info 🩰🖤