I signed up for the BRHT mostly because A) they advertised said horse trial as having the XC on the WEG course and B) they were discounting the stabling by $100. The fact that I have yet to be refunded said $100 is… annoying. And we’ll see- if they don’t pay me back be sure I will pitch an absolute fit. Ahem, anyways.

We arrived the day before the competition, and after the more recent memories of the too-small stalls at KYHP, it was pretty much amazing to find that Jack looked normal sized in the stalls at TIEC. And not only that, but there were ample (read: more than I could use) hooks on the walls for the various accruements that come with traveling and horses- I was easily able to set up my water buckets, hay net, and stall guard without pulling out any of the normal Tom-foolery (aka double sided hooks and the like). Not only that, but each stall already had a fan built in (though I added my own since the temps were/are still in the 90s) but that was a wonderful and unexpected bonus.

Handsome bathorse in his spacious batcave

I walked Jack around the grounds to show him the way of things, since we don’t typically see such venues like Tryon, and he seemed to take it all in hand. The thing we seemed to dislike most was getting near the [previously named George Morris] Tryon Stadium, which has a pagoda for the humans, and high walls surrounding the warm up ring, as well as all sorts of jump standards being stored and trucks parked and in general, just lots to look at. Luckily the event was cornered off to one end of the facility, so this was not of consequence, but still got Jack a bit riled nonetheless. 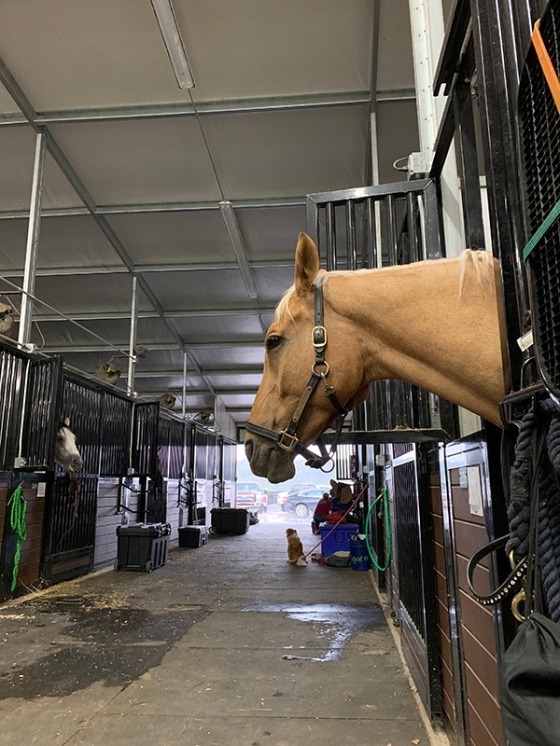 Jack in a less riled state

The day of dressage (and showjumping, but that’s another post), I took him into a “temporary” tent ring to do our pre-ride, though much of this included watching a rather feral horse being lunged at one end. Once that horse left, I was less distracted and Jack gave me some really nice work (it’s occasionally my fault for being ADD/spooky, and I’ll own it in this case). Then a couple hours later I went out for my actual warm up for the test, giving ourselves 20 min to just refresh some of the things we’d been working on- namely the free walk, and transitions from walk-trot and trot-canter.

If I had to judge my test just as I finished it, I would have put it at a 27. And this is only based on the scores that I’ve had before- but I was really happy with the balance and the straightness, both things I have been working hard on at home. I decided to forego some of the ‘forward’ that I had in my AEC test because I felt like at times I was running him off his feet, and focused on using bend and geometry to put together the best test that had the most relaxation (or at least what was possible given the environment). So while I felt like it was good, I did not in any way expect that judge to like us quite as much as she did.

A 17.9, then, put us tied for 1st. As it happened, our partner in the tie was a familiar pair- they had schooled with us the day that I fell off the second time at Will Faudree’s amazing facility. Considering he’s gone intermediate, I am pretty okay with that!