By now I feel fairly confident in Jack’s show routine, and he’s starting to feel a little more confident in it too.

He needs time to get to the venue and take it all in, so Friday we got there nice and early (before the potentially-tornado-holding-storms arrived) and went on a long flat ride. I made myself do a full 20 minutes of work at the walk- which normally means lateral work (shoulder-in, haunches-in, leg yield, walk half pass in each direction) until he settles, and then work on stretchy walk and medium walk transitions. When he feels loose, we start doing a baby trot and working in almost-walk and actual walk transitions to get him listening to my half halts. This also so far is exactly what my ‘pre-ride’ looks like the next day.

Eventually I’ll start doing canter transitions and work through a few elements of my test before finding a quiet calm note to end on. Jack was really good and relaxed Friday, and came back mentally very quickly despite the fact that the tent catching the wind like a sail occasionally caused a spook or two.

Saturday, I got him out of his stall and went for a walk around the grounds before tacking him up and doing said pre-ride. We stopped after one canter depart in each direction and a centerline, so that he still had plenty of gas in the tank for our dressage test later.

So by the time we got to our actual dressage warm-up, Jack had seen the rings from a riding point of view twice. He felt relaxed, even a tish lazy, so I was careful not to go too crazy getting him really forward in the warmup and leave nothing for us in the dressage court. A quick glance from the coach to make sure we didn’t look terrible, and we went over to the ring.

Jack being a spooky guy, I made sure to walk him around the perimeter of the arena a couple times and give him lots of scratches next to the judge. I felt pretty confident going down centerline, and was disappointed when we had 2 decent sized spooks mar our test. 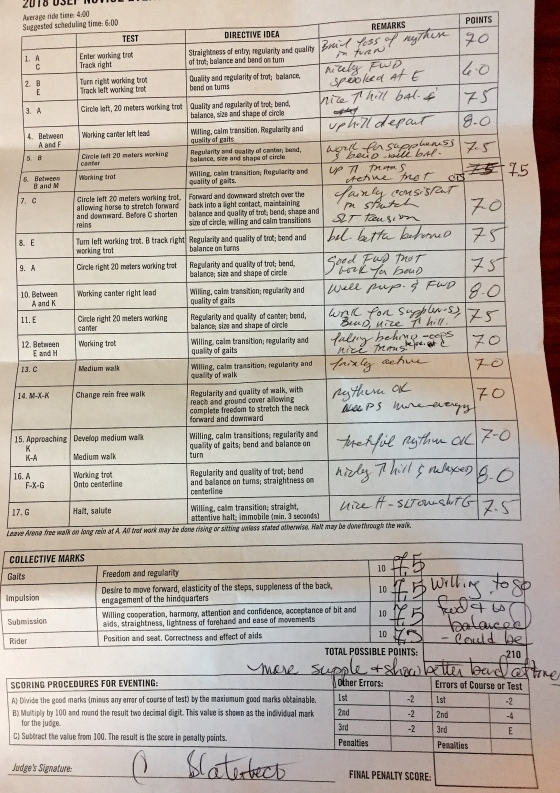 The judge practically had to score us down for the one approaching E since it was so obvious, which was unfortunate. Otherwise the test felt obedient and I made sure to show good geometry as much as possible.

I knew I didn’t have the free walk I really wanted, but didn’t want to put too much leg on and break gait, so subsided with getting the reach and swing without having the forward I would have liked. I also overshot centerline slightly, but overall was happy with the quality of the test, despite the couple bobbles.

The judge rewarded us with a 26.4, putting us at the top of the leaderboard going into cross country.

But more on cross country tomorrow!