Sunday we went to the Pinehurst Harness Track to get some more mileage at Beginner Novice Test B, which is the test for the big recognized doozie this weekend. Instead of doing 2 different tests, I actually chose to do BN-B twice, and save some precious brain cells in the process.

We got to the Harness Track and squeezed into a spot along the rail (thank goodness for my teeny rig), got Jack tacked up and hustled to the warmup. He had gotten Perfect Prep Gold the day before, and PP Supreme before getting on the trailer, and I don’t know if it was that or just happenstance but while alert and looking around, once I was in the tack he gave me the best warm up to date.

Our first test was obedient with moments of tension, namely in the corner at K where he fixated on departing trailers and other new things. We scored a 70.5% (29.5) for this one, and the video is below:

Following that, we had roughly 15 minutes before going back in, and made good use of a warm up area just outside the ring so that we could get his attention focused on me near scary K. It worked, and while test B felt better in many ways, Jack got the idea to start hollering through pieces of it, which apparently the judge didn’t like. We got a 70.25% (29.75) for that one. Nothing like being consistent, eh? 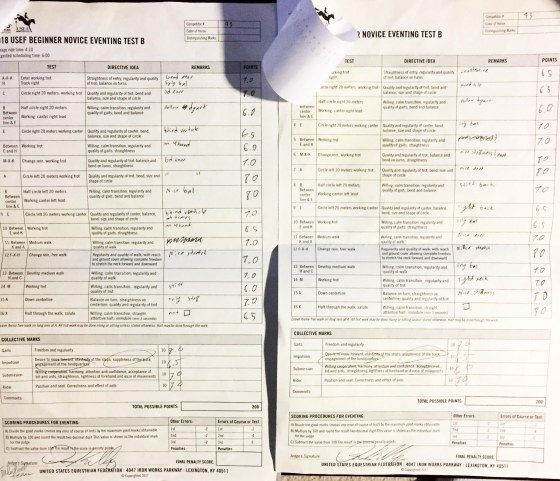 As you can see, the highlights in both tests were the left trot circle, left lead canter, free walk, and final centerline. Everywhere else there are subtle differences, as he was tense in different places between the two tests.

In general, I’m pretty thrilled with the outing. Jack got some more experience in the dressage court, I got to test out Perfect Prep products, and we achieved our goal (albeit barely) of scoring in the 20s. Our dressage trainer got to see him in a show environment and help us formulate a plan for the warm up at the Southern Pines HT. So all in all, despite no blue ribbons, it was a big win-win!