So in and amongst the activities involved in exploring the qualities of a future next horse, I also competed in my first recognized dressage show.

Just to recap, I have been riding TC, a 14.2h Paint gelding, for the last few months, imparting my admittedly limited knowledge to him along the way. Not to puff myself up (don’t worry, my ego gets thoroughly deflated if you keep reading), but I’m exceptionally proud of his progress- he has literally changed shape, become consistent in the bridle, and in general become a fairly solid little dressage pony [hony]. We took him to one clinic, which was my first off-property adventure with him, and promptly signed him up for his first show- and a big one- a recognized dressage show at the State Fairgrounds in Raleigh. 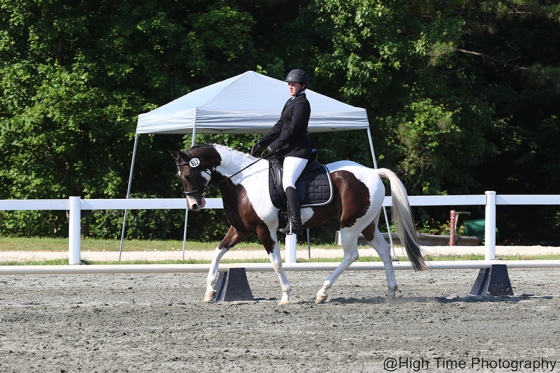 So we arrived at the fairgrounds the day before, and I had a beautiful schooling in a fairly quiet atmosphere, running through our tests and feeling like the 70% I was shooting for was there in sight. Our first test was bright and early Saturday morning, and the atmosphere was definitely more electric. For the first time since high school, I luckily had a coach to get through warm up, and things were going swimmingly until I asked for the right lead canter. Now I should caveat this with saying that TC has been fairly reactive to my left leg of late, but that morning he simply wasn’t game to pick up the canter. So I tapped him with the whip. Which induced a series of bucks and crop hops, almost running into another horse, and between steering, sitting, and pulling out a braid in my effort to grab mane, I ended up in the dirt. Cue 5 people who were sweetly concerned about my fall from on-high, and after assuring them that it wasn’t far to fall and thank goodness for good footing, my adult-amateur self girded my loins and got back on the damn pony. 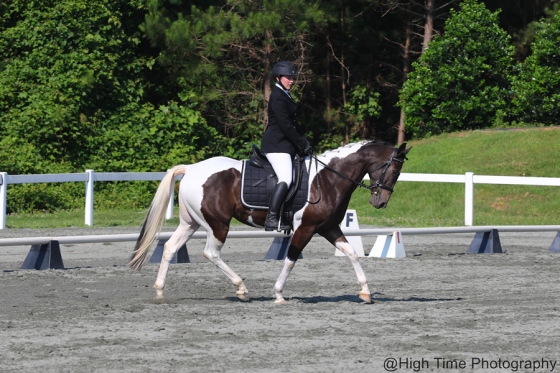 We schooled the right canter a couple more times, which continued to induce drama, and I determined to sit way back in the transition and let the chips fall as they would. Our test, as you can see in the 2 photos above, was a little high and tight, and my position a bit defensive and hollow itself. We scored a 64% and a fourth place ribbon for Training 2.

After chatting with the trainer, we decided to leave canter out of our warmup for the second test (Training 1) and focus on relation and suppleness, and getting him off my right leg which he was bracing against. The warmup then was much more pleasant, and I went in to the arena and determined to ride the shit out of every movement.

Overall I am really pleased with the transformation here. We earned ourselves a 69.78% with a tough judge and a blue ribbon, which felt like redemption after the morning’s damage-control type of ride. I actually felt like the free walk maybe even deserved a little more credit than was given, but after trainer said we could round that up to 70%, I felt like it wasn’t worth nit-picking over. 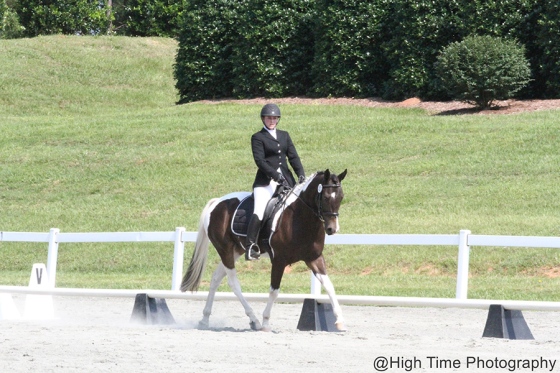 Pony got lots of praise and cookies and we washed him down while avoiding getting nipped (a fun new habit of TC’s). 2 ribbons, and roll in the dirt, and our first day at a recognized dressage show was in the books!