So, I’m a little late on this, but between the AEC’s, and first outings with the baby pony, it’s been a busy time.

Earlier last month, my friend A participated in a clinic with Phillip Dutton. The clinic was broken into a showjumping day, and a cross country day, and so I chose to come audit the showjumping and see what wisdom the man himself would impart. First impressions confirmed that Phillip is a relatively soft spoken individual, but I was surprised to see him really get after riders, no matter age or experience, if they weren’t getting it done. During breaks he very kindly acquiesced to answering all of our questions and recalling his time in Rio just a week before.

As for the clinic, I watched levels from Beginner Novice up through Preliminary, and each set did basically the same exercise with subtle variations for height involved.

The Warmup
After reviewing their challenged and making introductions with P Dutty, each set of riders had an identical warmup. Trotting on a large (30 meterish) circle, alternating between really collecting and lengthening the gait, following by leg yields on/off the centerline. Then they would canter and again collect and lengthen, getting up in two-point position while lengthening and going for a bit of a hand gallop. 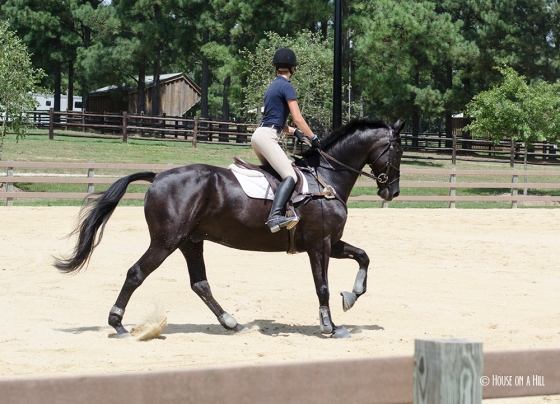 The Exercises
All groups but the prelim group then hopped over a little cross rail a couple times, cantering away on landing. Then the fence was raised to a vertical and the work began. The main exercise revolved around a 3 fence combination featuring a straight line to a bending line. Phillip demanded a thinking rider, and asked the participants to put in 5 strides between each fence, and come back and do the same in 4 strides. The bending line caused riders the most problems, and he advised to use your line as well as the pace to set the horse up for the correct number of strides between fences. He also was adamant that the rider not make corrections right before the fence, but that they prepare and stick to a plan and be quick on their feet mentally.

After each group successfully did the entire line, they then had the work on adjustability within the line, doing 4 strides to a 5 stride line, and then the reverse. Again, planning your line and having a rideable horse made a huge difference in how successful each pair was.

Eventually Phillip added in the small corner you can see in the arena, creating a bending line, to a straight line, to a bending line again. Again, each rider was made to vary the number of strides they fit between each element, now with the addition of a skinny fence for accuracy. At that point, the horses were extremely adjustable and most handled it without a fuss.

The Wrap Up
To finish off the day, each pair was asked to try their forward, coming stride through a one-stride combination. The fences were set at a solid height, often at the level above what each rider was competing at. The riders I spoke to were pumped with this accomplishment, and you can see how it would apply to the next day, which was cross country.

Final Thoughts
Overall, it was obvious that Phillip is a seasoned pro, as any mishaps were waved off and no matter the size, age, or level of the riders, they were made to come again and do it right. Sometimes this required multiple attempts, but Phillip would press and demand accuracy of each pair. What surprised me the most was that his expectations did not decrease for the lower levels, and riders who had learned to gallop just the week before were nonetheless asked to make the forward pace happen between fences. Based on his amazing save on the Rio cross country course, I would propose that his demands of the participants are nothing compared to what he demands of himself. Each student was pushed slightly outside of their comfort zone and as a result, grew as a combination throughout the day.