Or this post could be called, “Attack of the Wind puff”.

Foster developed some swelling in his back fetlock while I was in Savannah, and after having several people who are much smarter than me (i.e, the vet who did his shots, another vet looking at pics, and a former vet-tech) all diagnose it as a fresh wind puff, I haven’t been too concerned. It had a minimal amount of heat it in, which again I wasn’t terribly worried about since it is so fresh.

Of course Foster doesn’t care, all he wants is more grass.. yay spring!

A few days ago though, this poofy blemish took on a little more heat than I was comfortable with. So I’ve been poulticing it and hoping it goes down. I’ve worked Foster only a few times since the last clinic, and kept our rides pretty simple- lots of stretching, some basic transition stuff, and given him a gram of bute after each ride to reduce the swelling. After not seeing much change, I’ve gone the next step and started applying Surpass, a DMSO based cream, to it. 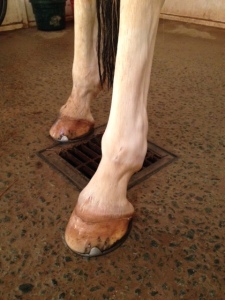 Fetlock a week ago

A couple days ago

Technically, Foster is sound and ready to go, but I’m being a total helicopter mom and watching his leg like a hawk. Nothing shows up lameness-wise when I ride him, and if anything he feels more forward than ever. There was a wee bit of tension in his back last night, but I put that down to us not working on transitions recently and insisting that he not use his neck to pull himself into the next gait. So, my hope is to ride him and apply more cream Wednesday, and check on him Thursday morning and see what it looks like. Rinse and repeat for Thursday night/Friday morning. If the heat really has not gone down at all, I’ll consider scratching. 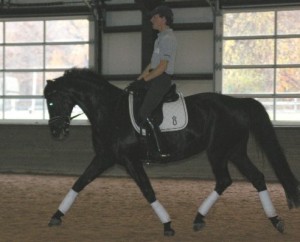 thank you, google, for the pic of Brendan riding

If you’re wondering what the clinic is about this weekend- it’s a dressage clinic just 15 minutes up the road, with Brendan Curtis. I’ve seen Brendan ride many a time beside Jim Koford when they both trained at a barn I used to board at. I never got to take a lesson from him, but I have a friend who has become a beautiful dressage rider who highly recommends him, and I’m very curious to see what he would do with us!

So, our preparations this week are mostly focused on easing my mind about Foster’s leg, and if it gets better we will just have to see what happens at the clinic. He should at least be able to rock a stretchy trot and some lateral work! I’d love to have the opportunity to ride, but Foster comes first. We’ll see what happens.