We could rename this blog “Stupid Things Britt Does With a Horse”, and it would be a more descriptive title than the current version.

But let’s start at the beginning. I arrived home from Pittsburgh Friday night about 7:30, convinced the husband to take me straight to the barn where I cleaned the white bits of Foster and packed the last remaining details for the show. Proceeded home about 10:30pm, and unsuccessfully tried to sleep. Got to barn at 5:30 Saturday morning, hooked up and rolled out around 6:20 am. About 15 minutes before arriving at the show, I asked my buddy to look up the test for me so I could go over it once more in my head [most of my test practice had been mental to date, as riding time has been limited by my geographical location and/or weather]. Found out the test I had ridden once physically, and many more times mentally, was the wrong test, and started memorizing the new one.

One thing I love about my horse is that he brings his A game to shows. He tends to get really tense and anxious at home when he sees the trailer, becomes a bit spooky in the cross ties as I put on his shipping boots and fairly prances his way to the trailer. But once he gets to the show, he unloads casually and is always cool as a cucumber. I had the most relaxed horse under me during warm up, and I felt awesome about his dressage test. Beyond coming above the bit in his canter transitions (which we have practiced absolutely nil in the last month), he felt extremely obedient throughout and soft as butter. My hands are a little low, but I allowed his frame to be more Training dressage like, and so since there is a straight elbow-to-bit line, I’m okay with that. When we checked the scoreboard, the placings reflected a strong test- 2nd out of 13! 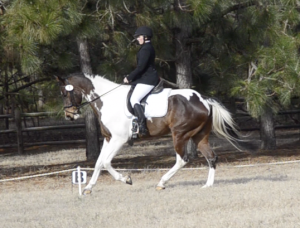 In the showjumping warmup, Foster continued to be really relaxed- almost too relaxed in fact! Julieann acted as my coach and tried to get me into a more forward canter, and while we got it in the end, I was a bit worried that he wouldn’t be able to maintain that pace through the course, but I pledged to try.

Imagine my surprise when Foster came out guns blazing in the arena! I thought the first fence was a bit spooky (and recalling our last horse trail there), decided to ride aggressively with a couple warning taps on the shoulder which may have gotten him a bit revved up. I may have also not held the soft knee I was striving for, and so he sensed my tension and got a bit carried away. Either way, it was a point and shoot kind of round, and he jumped me out of the tack a couple times for sure! But clean and clear and heading to XC!

Cross country was where I of course had the most concerns leading up to the show, because of both technical and fitness related questions. He knocked a pole pretty hard in the warmup and overreacted a little bit (with of course the timers yelling at me to get in the start box), so I chose to approach fence 1 with a more collected canter that I could control. After that he really opened up, and we had a fantastic run all the way through the water fence. After that, I breathed a big sigh of relief and mentally went on cruise control. This was a bit of a mistake.

I approached the half coffin, cruising along and thinking nothing of it, and Foster saw that there was a second element (it was a jump, 2 strides to a reasonably sized ditch), and hesitated. Had I been thinking at all, I am 100% sure he would have gone straight over it, but that’s just it- I wasn’t thinking. So we had a run out, whereupon I brought him back to it and he went straight over. Over one more fence, and we were done. I pulled him up, told him he was a good good boy, and basked in the knowledge that we finished our first Novice course.

Then I realized (by way of whispers), that I hadn’t gone through the finish flags.

Palm to forehead, then hopped into a canter and backtracked to go through the flags. Word of advice- don’t leave your brain at jump 15. Whoops! In any case, Foster behaved better than I could ever have imagined, and  my stupid mistakes cost us a beautiful red ribbon! But in the end though, it wasn’t about the ribbon- it was about getting around and giving Foster a positive experience at the Novice level. I am so proud of him and how he behaved, and can’t wait to take him to the next one!

I do want to take a moment to thank Julieann for coming with me, being a source of positivity that I really needed, and taking the lovely video for us! You’re the best!