I won’t lie, I had a pretty looming sense of anxiety leading up to the Boyd Martin clinic. Despite only having signed up for showjumping, and Jack jumping great recently, I felt ill prepared and the sense that I was going to be that person at the clinic- the one that fudges up so often that everyone else gets frustrated with not getting their due time. In part this ended up being true, but for the most part the lesson went well and of course the day was all about learning anyways.

After warming up, we started through a grid set up on the diagonal with ground leading poles. The exercise was a one stride to a one stride, and emphasis was put on being smooth and not interfering with the horse as he went through the grid. It gradually got bigger and the poles came up to bring more focus to straightness, and Boyd had us do circles before and after the grid. That, he said, improved rideability by setting expectations that there was more to do than just jump through and be done. He wanted us to hustle to get the correct lead ASAP after the fence, and use the circles to find the horse’s balance.

After that, Boyd immediately jumped (har, har) into coursework. There was no ‘jump 3 jumps and we’ll build on that’. Instead, the courses were what you might expect on a shortish show course. He gave us one random fence to start (saying, rather prophetically, that most of the time the first fence was the worst- and this wasn’t just for me though as you see I dropped my reins rather stupendously over it) then lots of bending lines, roll backs, etc. The strides were all set 1-2′ shorter than at shows- which made things tricky for Jack who has no problem with his 12-14′ stride at shows. It was going well enough until we got to a skinny oxer off a rollback, and I could not see a distance for the life of me. Of course then I threw myself at my horse, who stutter stepped and then went, making for a glorious effort that ended with my losing a stirrup and my dignity.

On the re-approach, I thought I would add more canter and maybe get the longer spot I had (maybe/with drunk goggles/imagined) sort of seen, and clearly that was not the recipe for success. As Boyd put it, third time’s a charm, and the final attempt I really went for it and though we got over, it wasn’t exactly the smooth effort Boyd wanted.

The second course then was about refining some of these things and adding in a triple for good measure. Again, it was set a little on the quiet/short side, but Jack was jumping quite well despite all of that. Since we don’t have dependable changes, I thought the triple was a bit choppy, since I didn’t get super organized well enough in advance. Boyd obviously thought the same thing, and made us come through it again.

Overall, the lesson was successful and pushed me to ride harder than I have in a long time. I’ll be posting another post to go over my general thoughts and observations from cross country. But as you can see, we survived! [Barely] 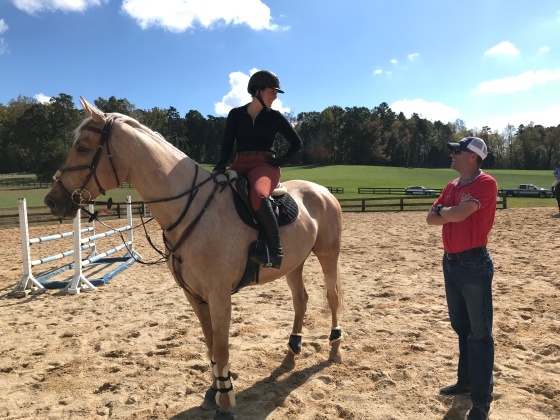