In addition to attempting death by humidity, I’ve also been getting my learn on this week.

On Monday it was a dressage lesson, and I warmed up Jack with a long walk warm up on a long rein, changing direction and overbending him through the neck to work out the kinks from his chiropractic session a few days prior (she had found issues on both sides of his neck, and he was wonky a couple days after). I then asked E to get on him since I had expected him to still be stiff, but actually he felt and looked really supple through his whole body.

After feeling him out, I hopped on him and we discussed some specific body mechanics concepts that were picked up from a recent Suzanne Von Dietz clinic. One of these nuggets included correcting a common rider problem- low hands. Often, if a rider is told to raise their hands, their shoulders also creep up- whereas instead the shoulders should stay down and back.

The visualization for fixing this then is to think about a wheel mechanism driving up our torso. As it brings the arms and hands up, it drives the shoulders down and the upper torso back. This was a really helpful mental reminder for me as we went along, and I could quickly correct myself when my hands got low by just hearing E mention the wheel. 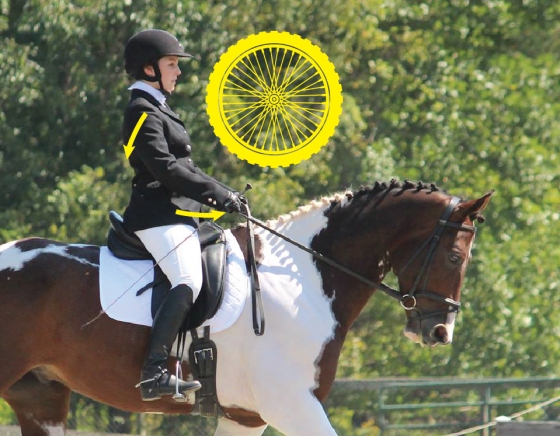 The other position tip I got was regarding how my pelvis sits in the saddle. My pelvis should mirror his, just as my shoulders should mirror his. So for lateral work or work where he is truly bent around my leg, my shoulders are turned even more, creating a corkscrew effect on my torso which engages my core and makes for a stronger rider in general. My pelvis should sit somewhat forward on the inside of the saddle, specifically thinking about the pelvis and not the hip. Bringing the hip forward tends to make us tip forward and close the hip angle to the inside of the horse. Bringing the pelvis forward keeps the upper body back. By having the inside of the pelvis forward, and outside leg should stay back. You know you’ve got it right when you can feel the stretch through the outside hip flexor.

That stretch in particular was a really good indicator of whether or not I was doing it right- no stretch = pelvis not twisted to follow his bend.

We took these concepts into working on his collected canter and bringing his hind end along for the ride in order to start developing what will eventually become his pirouette canter. Homeboy is obviously feeling really well, because he was really sitting and was taking the weight himself versus dumping 1300# into my hands. Our half pass at the trot was also feeling great and so much easier in each direction.

Honestly, I was smiling from ear to ear after this lesson, despite Jack and I being soaked through and dog tired.

We had a successful jump lesson as well, but that’s enough detail to bore you with for now!

4 thoughts on “Biomechanics, Pirouette Canter, and a Dressage Lesson”