So, the recap of our Novice debut begins!

We arrived at the Carolina Horse Park much later than I originally had hoped for Friday evening after a day of utter chaos, but I was able to eek in our ride, which was 20 minutes free walk-medium walk transitions plus a little trot and canter, before the light ran out.

Saturday morning because of the timing I opted to do Jack’s pre-ride instead of hand walking, because it seems to settle his brain much more to have a job. So we meandered along the track of the warm up ring for a solid 10 minutes, followed by 5 min of free walk – medium walk transitions, then trot-walk transitions and a canter circle in each direction before going back in.

The pre-ride seems key for Jack, and when we went back out to the warmup ring before the actual test he felt much more relaxed. We repeated much of the routine from earlier in the day, with a focus on energy and straightness, and with him feeling ace we headed into the dressage ring.

Overall I’m thrilled with the test. He felt so relaxed that I was finally able to ask for more energy in the trot. This in itself has been a big goal, as we’ve been keeping his trot small and relaxed in the show ring to be a little risk-aversive. If we had pushed for a bigger trot before he was really relaxed, we always had moments of tension, hollowing, or breaking to the canter. This time I could put my leg on and not get an anxious tail swish or hollowing. Eventually I think I can ask for an even more forward trot, but this was a solid milestone for us. 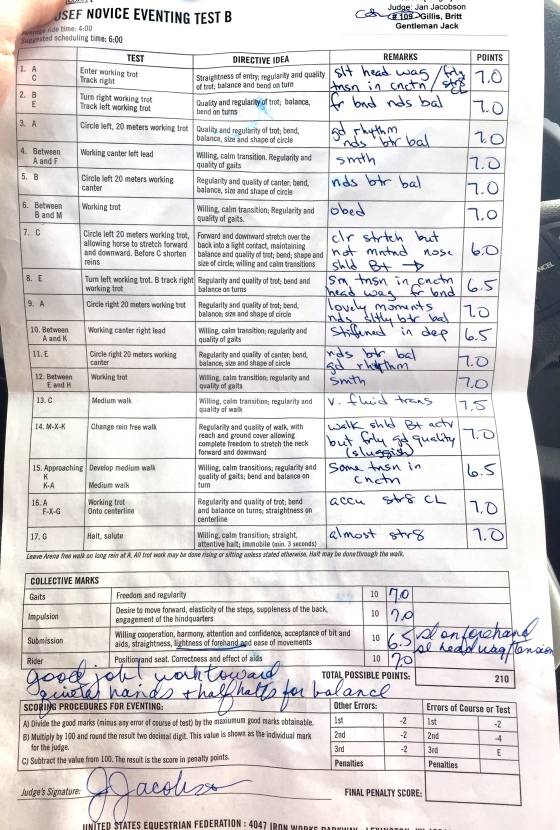 We scored a 31 for our efforts, though I had very much been hoping to break into the 20’s again. But a 31 put us tied for 3rd out of the pack of 14, and so I really shouldn’t complain. Jack was a really good boy and his confidence is just gaining and gaining with every show- and that means so much to me! Besides- we had his first Novice course to consider! Details of that to come tomorrow 🙂

Happily, Jack seemed to be feeling better for our first time jumping in a couple weeks. 🐎 T-2 days to Aiken!
Last week was not our week. 🙊 12 hour work days, cancelled lessons, and a poorly timed heel grab had something to do with it. 🤬 I ended up scratching from the jumping for our CT on Saturday just to stay on the safe side. This week will be about surviving work, finding time to pack, make sure Jack is in jumping shape, and prepare to head down south for our first Training. 😱 #whatdoesntkillyoumakesyoustronger ??
My top nine is no surprise- this seemed to be my year with Jack. But so much more happened. Our family number was in flux this year- the surprise of getting Foster back, the heartbreak of losing Elliot, and the joy of adding a new janky Manx to the Gillis clan in Effie. Through all the shows, the smiles and the grief though, @trgillis0324 has been my rock, and 2019 marks a whole decade together. Let’s see what the #roaring20s have in store for our #dirtythirties babe.
A collection of shots from London- some regal, some small, that captured my attention in the capital city!