Phew! After spending the weekend playing photographer to two different friends, herding rabbits, eating kangaroo, riding green ponies, and much more, I’m spent. They do say there’s no peace for the wicked though, especially when there’s a show the next weekend! And so the sprint will continue through the week, with two lessons to cram in last minute tips, finding clothes not seen in years (where the heck is that stock tie?), and in general trying to not freak out. No big deal. 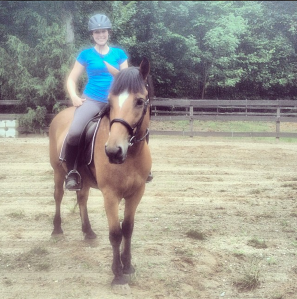 Luckily to ease my mind, my jump school with Foster last night went really well. I tried out a new bit to deal with his neck-balancing issues, with some success. Normally Foster goes in a full cheek Waterford for jumping, and the bit I tested was a Waterford with a baucher cheek piece. Not a revolutionary change, but I found that it did help in asking him to break at the poll, but it also lowered his poll pretty substantially. It may be a good bit to consider for showjumping in the future, but I don’t think I would use it yet for cross country at the risk of him getting a little more on the forehand than I’d like. For now, this one goes back and we’ll stick with the full-cheek version.

Beyond that, I worked on lengthening and collecting the trot, and Foster was much more responsive to my cues than in my lesson. I set up a course at 3′ – 3’3″ to include a one stride and a big rollback. The first time I did my made-up course, I went into auto-pilot mode and just let him do his thing. Then after a swift mental kick to the butt, I actually rode the darn thing. No careening around corners, actually attempting to get the leads right, and all that jazz. It wasn’t perfect, but in general much better than the last time I practiced. We even worked on angled fences, taking a 3′ vertical from a 45 degree approach in two different directions- Foster went over it all like a champ! 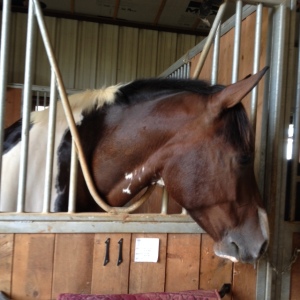 Happy to see this cutie again !

So that’s my brain dump about last night’s ride. Tonight we have a dressage lesson and I hope to do a fix-a-test type ride so I can eek out a decent score this weekend!