Now that I have had a couple days to catch up on sleep (14hrs my first night back- yikes!), I have begun to formulate some thoughts on the American Eventing Championship experience.

First off, the show was very well run. Unlike some of the local events I have been to, the Tryon International Equestrian Center was absolutely crawling with volunteers. There were so many scribes that signed up to volunteer that I actually got bumped to bit check, and overflow volunteers went wherever they were needed. The overall atmosphere as a volunteer was really positive, and the faculty made sure to make us feel welcome and appreciated throughout our shift.

Coming into this AECs, knowing that it was Tryon’s first, and the USEA’s largest, meant that growing pains and hiccups were to be expected. But wherever possible, the Tryon team was exceptionally quick to make improvements on the fly. When trailer parking was filled up, bulldozers graded the rest of a scrubby field within a couple hours to allow for more. Anywhere there was an issue with the footing on cross country, you could see that they were putting down sand and gravel immediately. In one instance, where a downward hill caused lots of problems on the first day, we returned the next day to find the entire hill sanded, an effort that probably took the better part of the night to make possible. 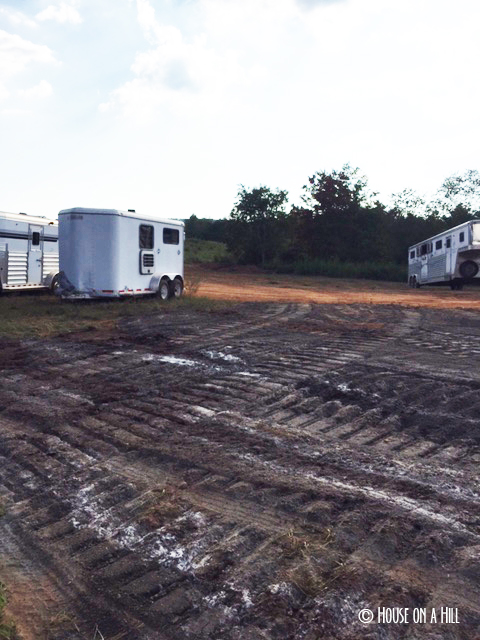 We squeezed our trailer into the last spot available (white bumper pull), only to come back and discover the trailer parking area had been doubled

And while I won’t get into my own thoughts around the technicality, etc, of the cross country course in this post, I will say that the even was absolutely spectator friendly. With the help of jumbotrons and grandstands overlooking the derby field, it was well and truly possible to see a lot of each rider’s run. While the giant screens were turned off at the lower levels, it was especially cool to be able to watch the water complex go and still see the majority of each Advanced rider’s course. Say what you will, but there is a pro to this set up, and that’s that it makes the sport more accessible to spectators and the public in general, in that through these new ways of watching the heart and soul of our sport, they can more readily understand and appreciate the tasks we ask of our horses. 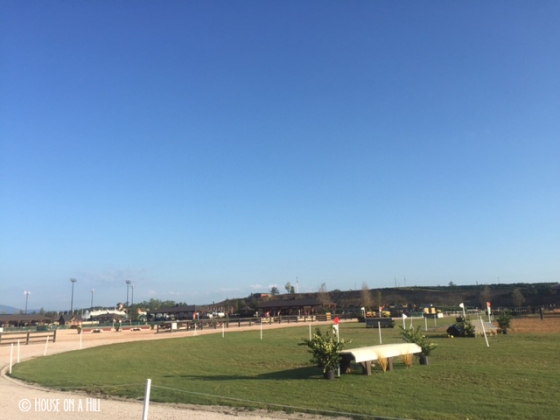 Lastly, the main takeaway from the AEC’s is that this wasn’t a dressage show, folks. There was a real shake up in the standings at all the levels after both cross country and showjumping. Time was a factor for sure, but also occasional bogey fences that really tested some pairs. For instance, the unsuspecting table pictured above caused plenty of problems for the Beginner Novice riders if they didn’t keep their horses’ attention after the change in footing. Showjumping had a lot of atmosphere, and demanded a forward and balanced ride. It was obvious which horses were less fit when the rails came pouring down.

While there’s certainly room for improvement, it should be noted that every effort was made to make the competition a true championship. Regarding some of the controversy… more on that in a later post.

7 thoughts on “First Impressions of the AECs”