This morning Foster goes into surgery, and I will certainly post tomorrow about how it went. Until then, let’s take a look at the pesky bone chips themselves.

This is the first bone chip we discovered, and though it looks like it is located at the front of the fetlock, the x-ray doesn’t show depth, so surgery will show us exactly where it lies. Before going into surgery, the surgeon thought this was the one likely causing the most trauma, because you can see it is perfectly positioned to really tear up the cartilage in that joint. It may also be trying to form a cyst. Lovely.

The second chip is a bit tricker to spot. It’s back by the sesamoid bones, and here we are looking through the fetlock at a diagonal angle. For a better view of what the chip looks like, here is the other side of the fetlock compared to the bone chip. 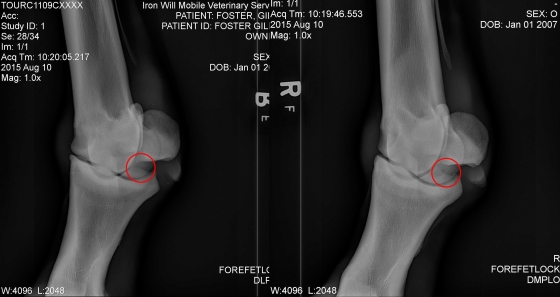 On the left you can see that the edges of the bones are nice and smooth, whereas on the right, there’s a decent sized chunk missing from the lower piece, and some jaggedness to the upper. Very scientific terms here, but you get the idea. The surgeon theorizes that the chip in this area (top left of the circle) may be buried in the surrounding soft tissue, so it is not clear until we delve into it whether or not the chip is worth removing.

Without the flexion test (which we only did because of some slight lingering swelling) and subsequent x-rays, I would have had no idea these issues existed. For now Foster is “serviceably sound” (video below), but I have every hope that this surgery will allow him a greater chance of both being comfortable and add some longevity to his career.

Thanks again for your continued support and I hope I’ll have great news to share tomorrow!

Leave a Reply to The Exquisite Equine Cancel reply