No rest for the wicked, as I’ve said before, and after a nice day off after the show, we had a dressage lesson. Now that the season is officially over, instead of doing test run-throughs we can now focus on new material, which will hopefully prepare us for next season and beyond.

Eliza mentioned that she thought we would work on the basics of piaffe this winter, since that is the extreme version of what we have been trying to teach him- to really sit on his hind end and stay active behind and light up front. Since I’ve never ridden the piaffe before, I can tell you the idea of such an upper-level movement is both daunting and pretty durn exciting!

Similarly, we will also be spending a lot of time focusing on collection, lengthenings, and lateral work to teach him to lift his shoulders. We set a tentative goal for next year, which is to compete in a dressage show (which I haven’t done in a long time!), aiming to do a Second level test.

Even though we set these goals at the end of the ride, the lesson did incorporate primarily Second level movements. We worked on collected walk, lots of trot-halt (for half a second)-trot transitions (for sitting back), lengthenings-to-collected trot, and collected canter (gosh this is hard). 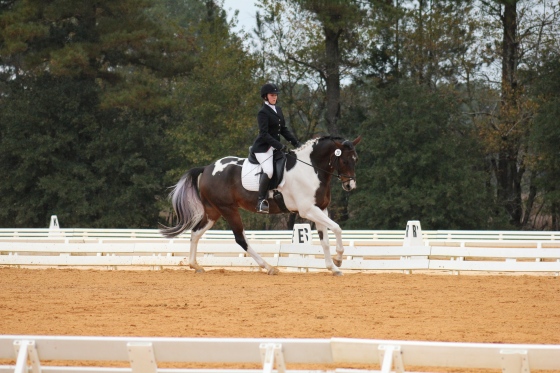 We also spent a lot of time working on lateral movements within the walk. We started with 180° turn on the haunches, really focusing on making it super correct. I need to think about weighting my inside hip bone and keeping his haunches to the inside so he doesn’t leave them behind in the turn, as well as keeping my inside leg back so that he keeps the bend around it. Talk about a lot of coordination! And something new I learned- the turn on the haunches movement allows the horse’s back feet to travel about the size of a trash can lid, whereas the walk pirouette, which we worked on after, keeps the hind legs within the space of a dinner plate.

Since this post is already getting long enough, I’ll combine my other notes in bullet-point form:

We’ve been busy, and so tomorrow I’ll tell you guys about the exciting cross country schooling we did his past weekend! Are you guys getting sick of all the recaps? Sorry!