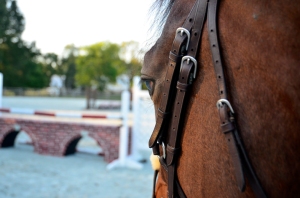 Last night a barn friend and I attempted a little photo session. She is thinking about selling her horse and I offered to take some photos of him over fences. So we set the fences up to some decent heights (3′ to 3’6″) and got going.

I warmed up Foster and popped him over a few fences and he was going well. We hadn’t been over the brick wall yet, which had a back rail set to 3’6″, but he was going so well and she was egging me on so we took it! No hesitations whatsoever, which was great because I was thinking I might be eating dirt. He did however almost jump me out of the tack going over it! After that we took some photos of her before I hopped back on a rode it again, this time without the back rail (no need to be an overacheiver!) So here is proof that my pony can tackle scary brick walls:

Over the wall we go! Cropping so you don’t have to witness my icky equitation!

We got a few more photos and I seriously need to get it into my head to stay up when we lands! It was killing me to see some of them afterwards *cringe*. But that’s why these things are so helpful! I want to school some jumps again a little later in the week so I get a good feel before the cross-country schooling over the weekend.

And in the land of dressage, Foster has been making some serious progress with his lateral work. We’re starting to stay soft through the leg yields, and our shoulder-in’s are not as sticky as they used to be. Still need to work on lengthenings and getting clear transitions between the working and lengthened gaits. Otherwise no complaints at the moment!

Onward and upward we go!

11 thoughts on “Jumped the brick wall!”